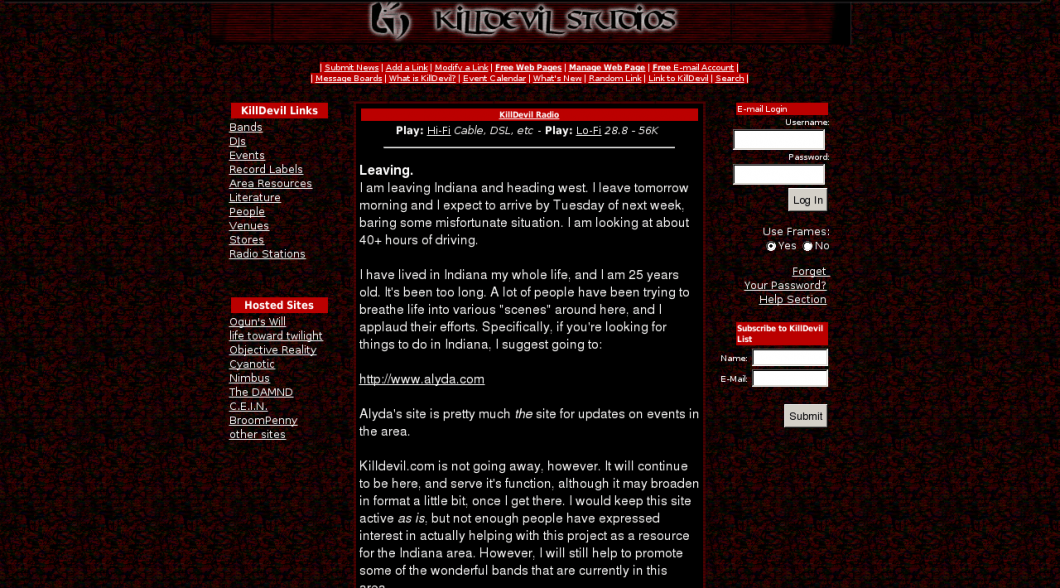 Besides my band website, my first major independent project was Killdevil Studios. It is now defunct and we lost control of the domain back in 2001 or so. Killdevil Studios is entirely the predecessor of Bottle Imp Productions, the small record label I manage currently. I built and ran it when I was young. Even the internet was young when I started!

Killdevil Studios was put together by me and my band-mate Sean Kent back in the mid 1990s, probably 1996 or 1997. We put it together to help cultivate the industrial music scene in Indiana, since there were a number of talented bands but no centralization to pull everyone together. Situation being what it was, most of the talent was separated by 100 miles or so. We experienced some significant growth, partially due to hosting one of the largest Skinny Puppy fan sites of the time, and my girlfriend at the time being featured as a “Gothic Babe Of The Week“.

We were somewhat successful. We hosted a number of industrial and gothic shows in Fort Wayne, Indiana between 1996 and 1999. We networked to help facilitate many other shows across the state featuring DJs and bands from the general tri-state area. The website included a link directory, a sort of scene oriented blog, and a webmail service through something called Bigmailbox. That service went down some time after we lost control of the killdevil.com domain, which had some repercussions since some good friends of ours were hosting their email there.

Since I left Indiana, I had more or less left the site to rot anyway and the domain lapsed. I started Bottle Imp Productions a year or two later to fill that creative void, which did not share the Killdevil Studios local focus, though it did end up serving that purpose in Detroit briefly, and with much smaller influence, between 2002 and 2007.

Help me understand how you use Spotify

I am looking for more information to improve your experience

Send this to a friend